The department of Journalism, Kalindi College organised an online workshop on 01st March, 2021. The workshop focused on how to write scripts for films and different elements of it. The Workshop was conducted under the guidance of honourable Principal Dr. Anjula Bansal and was convened by Dr. Meena Charanda,Dr. Rakhee Chauhan and co-convened by Dr. Ritika Pant.

The Workshop began with a welcome address by Dr. Ritika Pant, Faculty, Department of Journalism, Kalindi College. This was followed by the introduction of the guest speaker, Dr. Ipsita Barat. She is an Assistant Professor in the Department of Mass Communication and Videography at St. Xavier’s College, Kolkata for more than nine years now. She is also acting as the Head of the Film Studies Department at St. Xavier’s College. She has completed her PhD. from Film Studies Department Jadavpur University, Kolkata and holds a master’s degree from AJK Mass Communication and Research Centre (MCRC), Jamia Millia Islamia.

She has also worked extensively as a media professional in Kolkata television industry. Additionally, she has been appointed by as a resource person for several educational films produced by EMMRC Kolkata for UGC nation-wide telecast.

Dr. Barat started by addressing the students and advised them to give their participation to keep the Workshop engaging. She said “In order for a story to qualify as a script, it needs to have a Conflict”. Thus, focusing on different elements of the film, she stated examples from films like ‘Finding Nemo’ (2003) and ‘The Sixth Sense’ (1999). To keep the students engaged, she asked students to come up with their own everyday stories that have different film elements to it.

She also stated “You do not include anything that you cannot show”.  It is necessary for a film to visualise the narrative on the screen appropriately. To help students in the future, she talked about an interesting website for script writing named ‘Studio binder’.

It was followed by a Q&A session, where she answered questions related to balancing conflict and beat altogether. Talking about characterisation and research, she put light on how all the five senses are important while writing a particular piece. Answering to the question if a story can be left unresolved, she talks about some kind of closure that happens. A change is always introduced in the course of events.

The 1-hour long workshop received massive participation of the students of all the years from department of Journalism. The total number of 149 registrations were received.

The Webinar concluded with the valedictory session where the vote of thanks was given by Dr. Ezra John, Faculty, Department of Journalism. 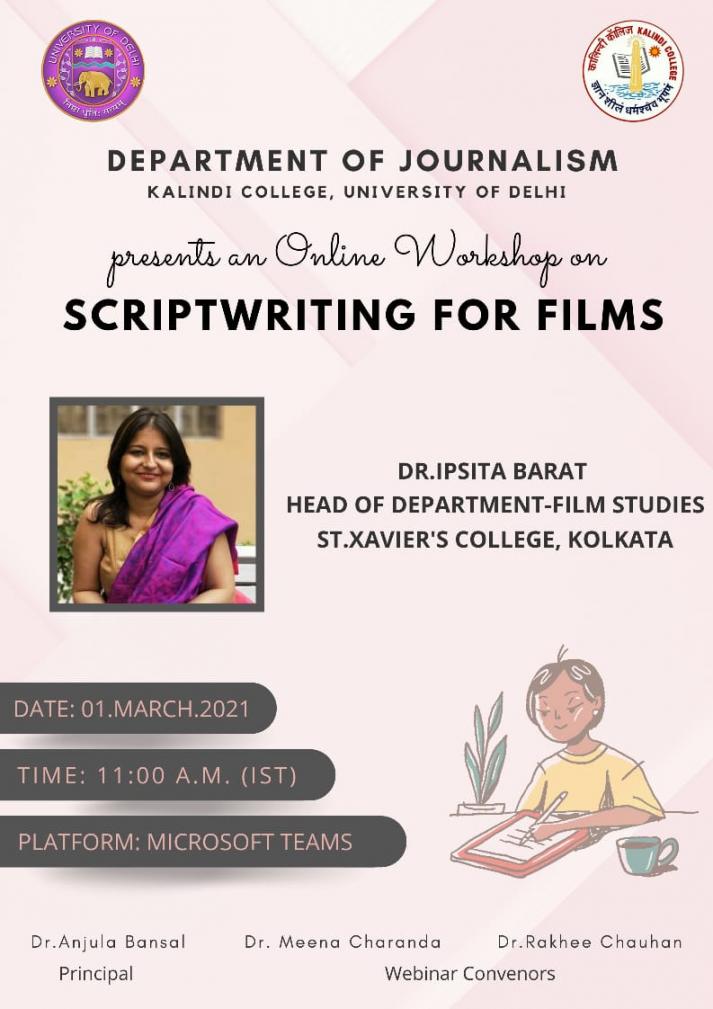