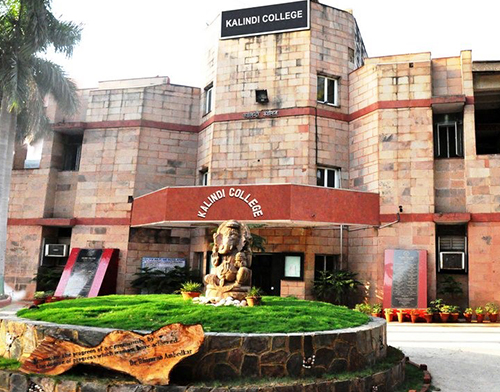 The College has come a long way since its inception in 1967 and is now seen as a destination where students can embrace their future with hope and confidence. Years of hard work put in by all stakeholders show us the way forward. As a constituent college of University of Delhi, Kalindi College strives to cater to higher education to young women with a vision of a new, fulfilling future for all. A nourishing environment supported by a combination of competent infrastructure and a dedicated teaching faculty helps our students to achieve the highest accolades in Academics, Sports and other Extra-Curricular Activities.

The College had a humble beginning as ‘Government College Devnagar’; within a year the college was shifted to the present location, again a Government School building, in East Patel Nagar.

The initial expansion of college infrastructure began with the foundation stone laid by the then President of India – Giani Zail Singh and included new administrative block, well-equipped Science Block and multipurpose Sangam Parisar.

Located in its own beautiful campus of 8.25 Acre in East Patel Nagar the College, offers courses under Non-Collegiate and School of Open Learning Centre, along with its regular courses and contemporary Add-on Courses such as Video Production Foreign Languages (French and Chinese), Tourism. With a team of dedicated and efficient teachers and strong and co-operative administrative staff, the college provides its students an environment conducive to all-round development.

Kalindi’s motto conveys three virtues of human life: knowledge, modesty and sense of duty. During all these years, the college has not only made substantial progress in the field of education, but also immensely contributed in the Nation building. Many of its students and alumni have reached to the great heights and achieved National and International recognition. The college strives to provide an intellectual environment for the emancipation of the intellect and spirit that stimulates both critical thinking and imagination.